My bags were down, the Air Con was kind, and the receptionist was smiling at me. I could see the pool, I could feel the bed already, but first thing’s first, where was the wifi… Fuck me, Cuba. There is no national Wifi network, and my international sim card wasn’t working. I was cut off. Good. I came to relish the isolation, and be outside of time or place. 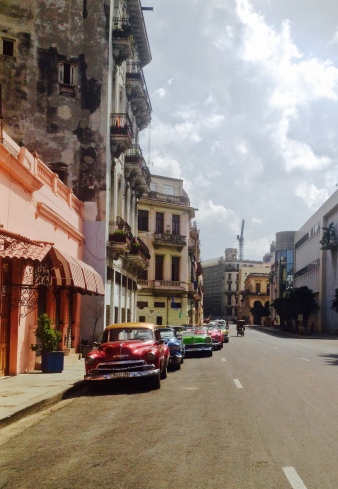 The barely still famous embargo on Cuba was the USA’s punishment for winning a two year war for independence, then defeating a coup attempt (the missile crisis happened a few months after the embargo was instituted for those looking for context). The embargo was never lifted, and thus a lot of left over 1950s Americana remains. Cuba sits within a time capsule, yelling defiantly from the most iconic of American motoring, “you can’t roll over us, you can’t rule us, and we’ve got your fucking rides”.

But the time capsule extends through small leaps of time as Cuba has not been completely cut off. The internet is here, just not in the way I now know it. Tiny hotspots exist in public parks, or for Havana tourists, in the major hotels near the central square. Here you will find swarms of locals and tourists with smartphones, tablets, and laptops rapidly getting information thrown at them like starving children. Like the children we all were twenty years ago

, because it costs between $3 and $6 for one hour’s access. Your alternative if you don’t have any of the above, is to pay slightly less, and use a public computer in the one store they have them, and use the Dial-Up internet there. This came in handy when the Wifi in Trinidad just went down for a couple of days. Cuba truly is a land of time-capsules.